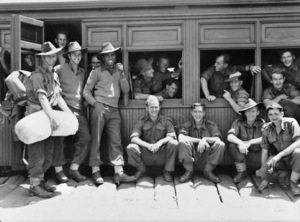 “Odyssey of a Warrior” is a documentary about Reg Saunders, the first Aboriginal Officer who took part in the battle of Crete currently being filmed and produced by journalist Michael Sweet.

Saunders’ Cretan years, where he experienced the selfless courage of the Cretan people, are central to the film and informed his views on social justice ever after. The film will use footage already shot in Crete – where Saunders’ daughters recently met the villagers who saved their father’s life – a deeply emotional and dramatic event – symbolizing a powerful contemporary multicultural message of kinship.

About this film
The story of Reg Saunders MBE (1920-1990) – the Australian army’s first Aboriginal Officer is a story of courage, humility and huge adventure.

This film tells Saunders’ life story – from growing up in Lake Condah Mission in western Victoria to leaving Melbourne on a troopship as a 19-year-old Digger in the opening days of WWII. It tells of his time in Crete in 1941 – fighting the Nazis, and then going on-the-run – an extraordinary chapter in his life, when, with the help of mountain villagers, he evaded capture for a year.

Deliverance from the hands of the Germans in Europe meant that he would go on to fight in the jungles of New Guinea, and after WWII in Korea. In each case, his return to civvy street was a harrowing indictment of Australian society at the time.

This war hero – loved by those he led, who fought for his country out of a sense of duty and pride – returned to a society blighted by injustice.

Out of uniform he suffered the indifference and outright hostility of a society where institutional racism was endemic.

After challenging the genocidal evil of the Nazis, the Japanese as they advanced towards Australia, and the communist uprising in Korea – Saunders had one last opponent to fight – Australia’s own inequitable system of entrenched racial prejudice.

As the nation’s social conscience and political system began to evolve and intervene on the welfare of all Australians, in 1969 Saunders took up a position in the newly-created Office of Aboriginal Affairs as one of its first liaison officers.

There he helped change the behaviour of the Australian public service in its interactions with Indigenous people.

A multi-layered story this drama-documentary will use rarely-seen archive material, dramatic reconstruction, and sequences filmed in Greece and Victoria.

The film will use footage already shot in Crete – of Saunders’ daughters recent meeting the villagers who saved their father’s life – a deeply emotional and dramatic event – symbolising a powerful contemporary multicultural message of kinship.

In Crete, Saunders witnessed the selfless courage of another ancient rural people. The experience informed his views on social justice ever after. His experiences in Crete are central to the film.

This documentary is made with the assistance and support of the Saunders family and has exclusive access to personal records, documents and photographs.

HOW DOES THE PROJECT MEET THE AIMS OF A PHILANTHROPIC FOUNDATION?
This film is about the importance of strong, mutually supportive multicultural retionships in Australian society – it is about the evolution of Aboriginal rights, but it is also a story of Australia’s rich history of South European migrant culture that stemmed from the bonds created in war.

Reg Saunders is an important role model and his story has never been documented on a canvas it deserves for the screen.

WHAT OUTCOMES DO YOU HOPE TO ACHIEVE BY MAKING THIS FILM AND HOW WILL YOU MEASURE ITS IMPACT?
A deeper knowledge of the story of Reg Saunders and his legacy. Measurable outcomes relate to the educational outreach activities related to the production including monitoring the level of distribution of the film on DVD. The producer will approach Australian broadcasters with a view to acquiring the film when complete.

WHAT IS YOUR EDUCATION AND OUTREACH STRATEGY
The intention would be for the film to be comercially distributed on DVD/Blu-ray as well as broadcast. The producer will seek distribution in schools as a teaching material for Australian High schools’ curriculum.

WHO ARE THE FILMMAKERS RESPONSIBLE FOR THE PROJECT?
Writer/Director Mike Sweet is a former documentary director and producer of BBC TV documentaries. He has also made radio documentaries for the ABC (ABC Radio National).

Full details of Mike Sweet’s broadcast documentary productions can be found at http://www.sweetas.biz/broadcast.cfm

Mike Sweet’s work for the BBC (The Slate arts series) was nominated for a ‘Race in the Media Award’ by the UK’s Commission for Racial Equality. His other broadcast and production credits include:

The Slate – Six Postcards from Another Wales. [BBC]
The Slate – William’s Story. [BBC]. Both films dealt with multicuturalism in the UK.