St. Mark iconography project should be completed in February 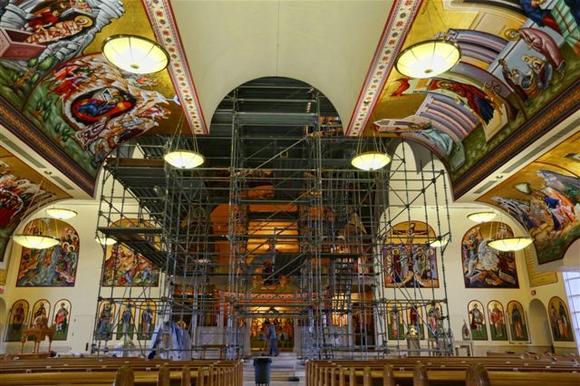 St. Mark Greek Orthodox Church in Boca Raton is wrapping up its project to paint the interior of the building with Biblical iconography. Artist Laurence Manos has been painting the saints for 10 years for the project. (Amy Beth Bennett / December 19, 2013)

At Sunday Mass, children point to the freshly painted ceiling. They crane their necks at the larger-than-life icon of Jesus Christ, offering a blessing with his right hand and holding the gospels in his left, on the colorful sanctuary dome.

This enthusiasm warms the heart of Matt Jenetopoulos, 86, a founding member of St. Mark Greek Orthodox Church. One of the goals of the church’s decade-long iconography project, after all, is to connect children to their faith.

“They respond, each in their own way,” Jenetopoulos said. “It thrills me to see they’re getting the message.”

After 15 years of planning and 10 years of painting, the church’s $2 million endeavor to fill the sanctuary with Byzantine-style portraits of the saints, ranging from John the Baptist to Herman of Alaska, is scheduled to be completed in February. For many of those years, the sanctuary has been filled with scaffolding, paint cloths and unfinished sketches, as an artist decorated the walls, the dome and almost every crevice with vivid portrayals of the Bible’s stories.

“We are following a tradition handed down centuries ago,” said the Rev. Mark Leondis, the church’s pastor for the past two and a half years. “Byzantine iconogaphy has been called ‘windows to heaven.’ It’s a glimpse of heaven on Earth.”

The Greek Orthodox Church has a rich history of painted icons, or depictions of readily recognized faces and symbols of the Bible. The icons have consistent facial expressions, symbols and colors, including gold as a representation of heaven, blue for human beings and red for divinity.

The icons and architecture are similar in all Eastern Orthodox churches, including Russian, Serbian and Polish. Orthodoxy split off from Roman Catholicism in 1054 during the Great Schism, when Pope Leo IX excommunicated the Patriarch of Constantinople because of several disputes, including conflicts over papal supremacy and the Nicene Creed.

Artist Laurence Manos of New Jersey was chosen to paint the St. Mark sanctuary for his skills in the classical Byzantine style and lively use of color, Jenetopoulos said. Manos studied the intricacies of iconography in Greece, where he lived for 15 years, including time at Mount Athos, an Orthodox spiritual center on a peninsula filled with 20 monasteries.

He came back to the United States in 1986 and began painting Greek churches throughout the country, including sanctuaries in Savannah, Ga., Holmdel, N.J., and Detroit.

“This is not artwork; it’s theology in color,” Manos said. “Every day, I learn. I never say I am fully done.”

Pat Sourlis of Boca Raton, chair of the February weekend when the sanctuary will be consecrated, begins to tear up as she describes the painting of the icons.

“It’s very emotional,” said Sourlis, a member of the church’s original parish council in 1980. “When you walk into an Orthodox church anywhere in the world, the one thing we all have in common is the icons. Whether you know how to read or not, it’s all there for you.”