John L. Santikos was a young boy who fled to the United States immediately after the Nazi occupation of Greece and at the heels of the Greek Civil War. One year after his death, officials at the San Antonio Area Foundation have announced that the Greek immigrant has left an estimated gift of $605 million to charity.

Santikos, who built a movie theater and real estate empire in San Antonio, Texas, died in December 2014. Although memorial gifts were made to some charities immediately after his death, the full extent of his gift was made public at a press conference at the San Antonio Area Foundation on December 15, 2015– almost a year after his passing. The SAAF will manage the gift and donations based on Mr. Santikos’ wishes.

Included in Santikos’ will a year ago were immediate gifts to charities working in his native Greece, including a $500,000 gift to International Orthodox Christian Charities, which is using the money to offer food assistance to vulnerable families in Greece, “This valuation represents the largest gift in the 51-year history of the Area Foundation and is the largest single gift on record in San Antonio. Santikos gifted the bulk of his estate, including his theater and real estate businesses and raw land assets to the Area Foundation after careful research on the best method for establishing a legacy fund that could make significant annual donations beyond his lifetime. The donation will fulfill Santikos’ desire to support a wide range of charitable programs in the local area. It will more than triple the community Foundation’s asset size,” according to a statement by the San Antonio Area Foundation. 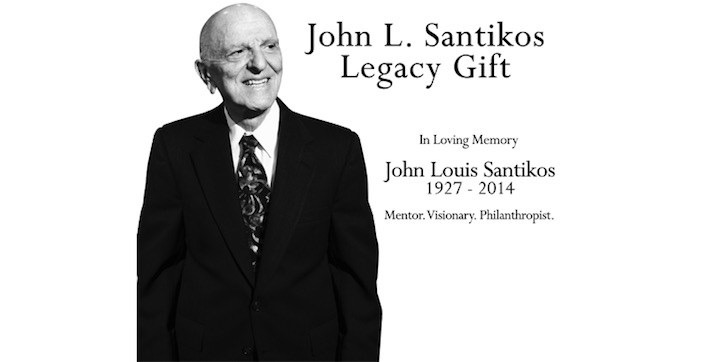 Although born and raised in Greece, Santikos’ story actually began in America with his father Louis, who first emigrated to the United States in 1911 from Greece. First settling in Waco, where he first worked in a grocery store, he noticed long lines of people who lined up every day to get into the Rex Theatre, a nickelodeon across the street. Sensing the opportunity, he saved his money and was able to buy the theater, beginning what would be a century-plus of involvement in movie theaters.

In 1918 Louis relocated to San Antonio where he began operating the Rialto Theatre, and eventually opening the Palace Theatre on Alamo Plaza – San Antonio’s first “movie palace” and the forerunner of the Majestic, Aztec and Texas theaters— the biggest and grandest theaters in the region.

Louis returned to Greece in 1925 where he met and married Toula Gatos and brought her back to San Antonio. In 1927, He sold most of his business interests in San Antonio and moved back to Athens, Greece where he became a successful film distributor and where John was born.

During the Nazi occupation of Greece, German Nazi officers took over the Santikos home in Athens, living upstairs while the family lived downstairs – a time of great tension and fear for the family. When the German occupation ended in 1944, the civil war broke out between Communists and British/American-supported forces. At one point, Louis Santikos and eldest son John fled the house just hours before Communist guerrillas arrived looking for them. The civil war lasted until 1949.

Fearing for his children’s safety, Louis sent John and then his sister Kiki and brother Dean back to San Antonio in 1946. John entered St. Mary’s University in 1947, taking academic courses and learning English at the same time. He earned his business degree in only two and a half years, during which time his father and mother eventually moved back to San Antonio, where he opened another theater— the Olmos Theater.

Following in his father’s footsteps, John joined his father at the Olmos, taking tickets, handling concessions and managing the theatre in all aspects, learning film booking, marketing – a practical education from his father and by hands-on experience. By 1958, John’s parents Louis and Toula decided to return to their native Greece, with John taking over the company in San Antonio.

John grew Santikos Theatres rapidly, purchasing and building theaters up through the Texas real estate downturn of 1987, when he sold all his theaters to Act III Theatres, owned by TV impresario Norman Lear.

Act III later sold all of its theaters – including those in San Antonio – to Regal Cinema. When Regal filed for bankruptcy in 2001, John Santikos was able to buy back all the San Antonio theaters he had originally sold to Act III.