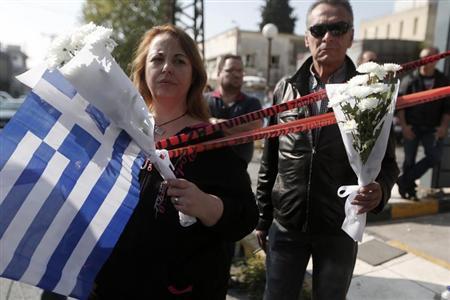 A Greek anti-establishment group has claimed responsibility for a drive-by shooting this month that killed two supporters of the far-right Golden Dawn party and raised fears of an escalation of political violence.

The previously unknown group “Militant People’s Revolutionary Forces” said the attack had been carried out in retaliation for the fatal stabbing of anti-fascism rapper Pavlos Fissas, to which a Golden Dawn sympathizer has confessed.

Police could not confirm the authenticity of the claim, which came on the eve of rallies to commemorate the 40th anniversary of a bloody student uprising against the military junta that ruled Greece at the time.

“The brazen murder of Pavlos Fissas was the drop of blood that made the glass overflow,” the group wrote in an 18-page letter filled with anti-establishment invective published on the news website http://www.zougla.gr . It called the rapper’s killing a “turning point”.

“The armed attack-response … is the starting point of the people’s campaign to send the neo-Nazi scum of Golden Dawn where they belong, to the dustbin of history,” it said.

The shooting of the two young Golden Dawn supporters outside the party’s offices in Athens on November 1 came at a time of growing public anger against a party widely regarded as neo-Nazi and accused of attacks against migrants and leftists.

Golden Dawn denies accusations of violence and rejects the neo-Nazi label. It denies any involvement in Fissas’s killing.

An opinion poll released on Saturday indicated that support for Golden Dawn had grown since the two men were gunned down.

The party, Greece’s third most popular in surveys, had shed almost a third of its support after Fissas’s death in September.

The poll by ALCO for Sunday’s Proto Thema newspaper, conducted on November 12-15, put support for Golden Dawn at 8.8 percent, up 2.2 points in a month but still below the 10.8 percent it enjoyed in June.

A government crackdown on Golden Dawn after evidence linking it to Fissas’s killing has led to party leader Nikolaos Mihaloliakos and five more of its lawmakers being charged with belonging to a criminal group. Mihaloliakos and two of the lawmakers have been remanded in custody until their trial.