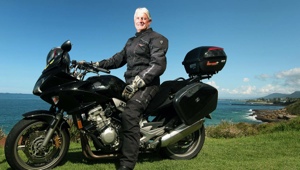 The second time around of a life-changing experience is never the same as the first time.

For Michael Wilkins, now in the final preparations for his second time riding around Australia on a motorbike, he’s already noticed that money is much tighter this time.

On his first trip, in 2010, he raised more than $8000 for the Steven Walter Children’s Cancer Foundation.

“Some of the businesses that supported me on the first ride have said they can’t do it now,” he said.

“I have written to businesses concerned with motorcycling and the community and I haven’t even received a reply. Not even a ‘no’.

“A lot of people wonder why they should give me money to go on a fantastic ride.

“I stress that none of the donated funds goes towards my costs, which will be in the order of about $8500 in accommodation, food and petrol.”

Wilkins’s motivation to set off on a trip to Townsville, west to Tennant Creek and Katharine via Mount Isa, through the Kimberley and back across the Nullarbor Desert, is not just to have a good time.

He first came across the Steven Walter Children’s Cancer Foundation while riding on the famous Snowy Ride, an annual event attracting around 3000 riders that has raised more than $3 million for childhood cancer research.

Walter was only 19 when he died in July 2000 after an eight-year fight against cancer.

His whole life revolved around motorcycles and he was a former NSW Junior Enduro Champion and an Australian Four Day silver medallist.

“The funds raised by the charity help pay for clinical trials, which are not necessarily funded by government money or drug companies,” Wilkins said.

“They are a small charity with only three employees, so the majority of the money goes to the researchers where it’s meant to go.”

His trip in 2010 was his first around Australia and it had a profound effect on the 63-year-old mechanical designer and self-confessed “born-again motorcyclist” from Bellambi.

“It was difficult readjusting when I returned,” he said.

“In fact, I still haven’t. We all had to face that fact that we had to get back in the harness and work for a living.

“It’s changed a lot of things.”

He wrote a book about the trip, A Lap for the Little Ones, and this time around will be writing a blog for the Mercury when he rides out of the Sydney Children’s Hospital on May 1.

“It is an expensive exercise but I have been able to justify that in my own mind because it is raising money for something that is pretty important, and because I had such a great time,” he said.

“It wasn’t so much the touristy things like the tree walk and the Nullarbor.

“It was more the intangible things – the freedom of being out there.

“There is such a feeling of release from responsibilities, worries, concerns and alarm clocks.

“The feeling of the freedom and the space.

After growing up in Oberon, where he learned how to ride dirt bikes, Wilkins came to Wollongong at the age of 22 to work at the steelworks.

He rode a bike to work and went out for more adventurous rides at weekends when he could, but time was tight.

Then he took a sales job in the early 1980s that came with a company car, and after keeping the bike unused in a garage for months, he ended up giving it to his daughter.

After many years involved in the Tech Waratahs Rugby Club, including six as president, he came back to motorcycling in his early 50s, when his body was too old for rugby.

Slowly, he met other motorcyclists and started travelling down to Phillip Island with members of the Ducati Club in Sydney.

“Although motorcycle riding is a solitary activity to a certain extent, it’s like anything – if something is worth doing, it’s worth sharing with somebody,” Wilkins said.

“That said, I often get out by myself on the bike and may do a loop down to Ulladulla, but it’s different with a group.”

He’s got the bug.

“There is the vastness and the wonder of it all,” he said.

“There’s the feeling that you are insignificant as an entity.

“The land is the dominating factor out there.