THE tallest woman in the world has died in China aged 40, say news reports.

Yao Defen died on November 13 in her hometown in the eastern province of Anjui, local newspaper Xin’an Wanbao reported on Tuesday.

She had been suffering from health problems for some time.

A tumour during her childhood triggered a growth spurt that saw her reach 1.85 metres by the time she was 13. Her family put her in the circus to supplement their meagre income.

Her adult height was reported by Chinese media as 2.36 metres, while the Guinness World Records has it recorded as 2.33 metres. 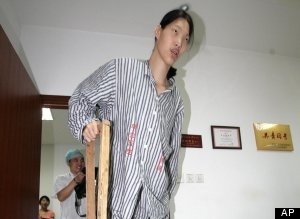