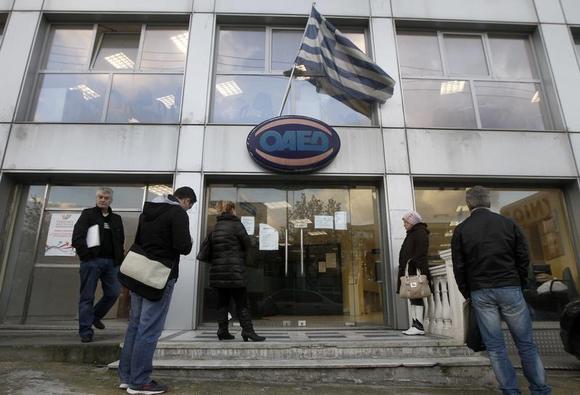 (Reuters) – Greece’s jobless rate rose to a record 27.5 percent in the last quarter of 2013 even as the pace of economic contraction eased, remaining the highest in the euro zone, data showed on Thursday.

Unemployment is a major headache for Greece’s coalition government, which expects recovery this year after a six-year slump and is keen to show there is light at the end of the tunnel before local and European parliament elections in May.

The fourth-quarter reading brought Greece’s annual average unemployment rate to 27.3 percent in 2013, up from 24.2 percent in the previous year.

The number of Greeks without a job has more than tripled since 2008, the start of a protracted recession that wiped out about a quarter of Greece’s gross domestic product.

About 72 percent of those without work have been unemployed for more than a year and so do not qualify for unemployment benefits which have been reduced to 360 euros a month.

Those classed as long-term unemployed stood at about 43 percent of the total when the debt crisis began in late 2009.

“As expected, the quarterly data revealed a new high in the unemployment rate. On a more positive note, the improvement in a range of real activity indicators suggest unemployment is near its cyclical peak,” said Eurobank economist Platon Monokroussos.

He expects unemployment to ease in the second half of 2014.

Other data recently have pointed to green shoots in the economy. Greece’s economic sentiment index hit its highest level in more than five years in February, while retail sales rose in November for the first time since April 2010.

The government and its international lenders expect the economy to grow by 0.6 percent this year.