One of the world’s most important Christian sites came under gun attack. The Greek Orthodox Monastery of St. Catherine, built over 1,500 years ago is one of Christianity’s holiest sites.

ISIS claimed responsibility for the attack via its news agency.

The attack on the monastery comes just over a week after suicide bombers attacked two Coptic Christian churches in the Nile Delta city of Tanta and the coastal city of Alexandria, killing 45 people on Palm Sunday.

According to the officials, the gunmen were shooting from an elevated hilltop overlooking the police checkpoint just outside the monastery, which is located in a remote desert and mountainous area in the southern part of the Sinai Peninsula, where, according to scripture, God spoke to the prophet Moses from a burning bush.

The Greek Orthodox monastery was a popular destination, primarily for Orthodox Christian pilgrims, but was closed to the public for security reasons in 2015, leaving only the monks and clergy inside the compound.

According to Orthodox Christian history, in the early 4th century, St. Helena, mother of Constantine the Great, built the Chapel of the Burning Bush at the site where Moses is supposed to have seen the miracle.

The fortified walls were built around the chapel by the Byzantine emperor Justinian (who also commissioned the Hagia Sophia) starting in 527. The Church of the Transfiguration was completed by Justinian’s workers in the 560s, around the time of his death.

In 2002, the area centering on St. Catherine’s Monastery was declared a World Heritage Site by UNESCO because of Mt. Sinai’s importance in three major world religions (Judaism, Christianity and Islam), the natural environment of the area and St. Catherine’s historic architecture and art. 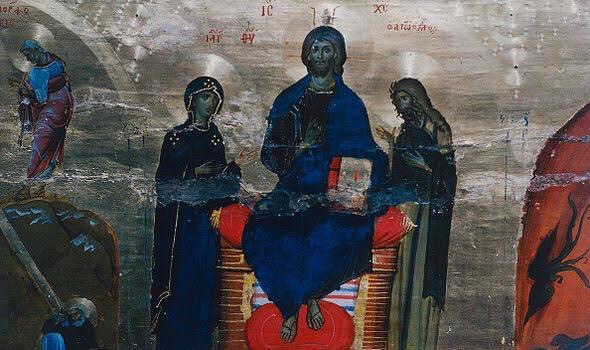 In 628 AD, a delegation from St. Catherine’s Monastery came to Prophet Muhammed and requested his protection. He responded by granting them a charter of rights, which I reproduce below in its entirety. St. Catherine’s Monastery is located at the foot of Mt. Sinai and is the world’s oldest monastery. It possess a huge collection of Christian manuscripts, second only to the Vatican, and is a world heritage site. It also boasts the oldest collection of Christian icons. It is a treasure house of Christian history that has remained safe for 1,400 years under Muslim protection.

The Promise to St. Catherine:

“This is a message from Muhammad ibn Abdullah, as a covenant to those who adopt Christianity, near and far, we are with them.

Verily I, the servants, the helpers, and my followers defend them, because Christians are my citizens; and by Allah! I hold out against anything that displeases them.

No compulsion is to be on them. Neither are their judges to be removed from their jobs nor their monks from their monasteries. No one is to destroy a house of their religion, to damage it, or to carry anything from it to the Muslims’ houses.

Should anyone take any of these, he would spoil God’s covenant and disobey His Prophet. Verily, they are my allies and have my secure charter against all that they hate.

No one is to force them to travel or to oblige them to fight. The Muslims are to fight for them. If a female Christian is married to a Muslim, it is not to take place without her approval. She is not to be prevented from visiting her church to pray. Their churches are to be respected. They are neither to be prevented from repairing them nor the sacredness of their covenants.

No one of the nation (Muslims) is to disobey the covenant till the Last Day (end of the world).”