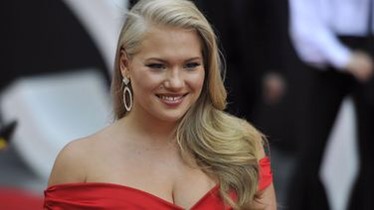 Australian-born and raised singer Anya Nissen has won a Danish competition to represent that country in the Eurovision Song Contest.

Two Australians will be competing in this year’s Eurovision Song Contest after NSW-born Anya Nissen beat nine other finalists for the right to represent Denmark. After narrowly finishing second last year in Denmark’s Eurovision selection competition – the Danish Melodi Grand Prix – Nissen triumphed on Saturday in the city of Herning with her song Where I Am.

Nissen, 21, brought up on her Danish parents’ farm west of Sydney, won The Voice on Australian TV in 2014 when she was coached by Black Eyed Peas star Will.i.am.

The Eurovision news site, ESCDAILY.com, says she was asked by SBS to go to Eurovision in 2015. But eventually SBS chose Guy Sebastian instead.

In May in the Ukrainian capital of Kiev, Nissen will be vying against the yet-to-be-announced Australian entrant and others in the Eurovision contest.

Last May in Stockholm, Australian singer Dami Im came second overall and won the jury vote with her song Sound of Silence, paving the way for Australia to be represented again this year.

Sebastian, Australia’s first entrant in the contest, came fifth in Vienna in 2015 with his song Tonight Again.

The Australian artist chasing Eurovision glory at the world’s biggest song contest is about to be announced, on Tuesday 7 March.

For the first time ever, Australia’s artist and song will both be revealed at the same time in an intimate live performance at a secret location in Melbourne – hosted by SBS’s Eurovision commentator, host, expert and enthusiast Julia Zemiro.

The artist reveal will be broadcast LIVE on SBS Facebook from 5.30pm. Stay tuned to the SBS Facebook page for updates and a countdown to the announcement moment!

Who will it be? Will a group, male solo, or female solo take the stage?

Is the song Australians will be belting out in their living rooms an upbeat party anthem, or emotional power ballad?

All will be revealed… Tuesday 7 March.

The Eurovision Song Contest semi-finals will take place on 9 May and 11 May, with the Grand Final taking place on 13 May 2017.