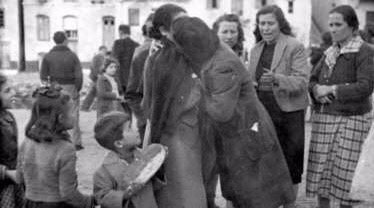 For three years, thousands of Greeks stayed in refugee camps across the Middle East.

The influx of more than a million refugees and migrants to the Greek islands in the past year has stirred up difficult memories for a dwindling group who followed the same route during World War Two, but in reverse.

As German and Italian troops occupied Greece, tens of thousands of people fled by sea to refugee camps in the Middle East.

At the end of the war, they began heading home. Most made it back safely, but for some the journey ended in tragedy.

“An event like this is hard to forget,” says Eleni Karavelatzi. “It leaves you seared with scars and makes you bitter forever.”

Eleni Karavelatzi was 12 months old when in 1942 her family fled the Nazi occupation of Kastelorizo, a Greek island 2km (1.5 miles) from the Turkish coast.

They sailed first to Cyprus and then to a refugee camp in Gaza known as El Nuseirat. They stayed there until the end of the war.

In September 1945, a British vessel, the SS Empire Patrol, left the Egyptian city of Port Said carrying Eleni’s family and 500 other Greek refugees.

Within hours, fire broke out onboard. Thirty-three passengers died, including 14 children.

From her garden on Kastelorizo, Eleni can now see the EU border agency ship searching for new migrants and reminisces about what happened in 1945.

“My parents told me that I was tied with a rope and lowered on to a raft. But as they were letting me down, my father saw that it was full and ordered me back. As soon as I was brought up, a woman jumped on the dinghy. It capsized and all the children drowned.”

Among the victims were Eleni’s three cousins, whose names are carved on a monument a short distance from where she lives.

Every September residents of Kastelorizo gather to commemorate those who died in the shipwreck
To the east of the monument lives Kastelorizo’s only other survivor, Maria Chroni, who lives with her granddaughter.

Maria Chroni, who was born in 1937, clung for life on a piece of wreckage.

“I found myself at sea holding on to a wooden plank.”

“How it happened, I can’t remember. I only know I that I stayed in this position for 10 hours. Then my father rescued me and lifted me into the charred boat.”

From Aleppo to Egypt and beyond

Other Greek refugees had fled the Nazi occupation to Syria. They were mainly from the island of Chios, a few kilometres off the Turkey coast.

“The Germans were here and we were hungry. I was three back then,” remembers Marianthi Andreadi. “So we left for Turkey illegally and from there we took the train to Al Nayrab camp in Aleppo (Syria).”

Marianthi remembers some of the faces that stood out on her journey. “I was surrounded by older women. And there was this moment that stays with me when we were on the Turkish border and the guard yells ‘Gel Burda! Gel Burda!’ (come here).”

“We ran away quickly. I fell down. And eventually he let us go. But I never forgot this.” 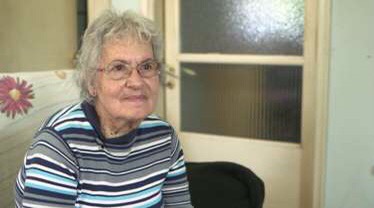 Greek archives reveal Al Nayrab camp was less a permanent settlement than a meeting point, says Iakovos Michailidis, professor of history at Aristotle University of Thessaloniki. “People were brought here for short periods of time before being sent to various parts of the Middle East, or even Africa.”

Ioannis Stekas travelled first to the Middle East and then into Africa.

He explains how his father sold their properties to send him and his brother abroad with their mother, Chrisanthi. 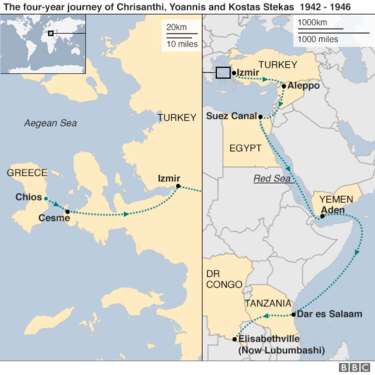 “He was planning to follow us with my 10-year-old sister. But shortly afterwards the Germans banned migration towards Turkey.”

In her diary, written down by Ioannis, his mother writes: “We went to Cesme (in Turkey) and stayed there for a month, then headed to Izmir, before travelling for three days by train to Aleppo.” Ioannis’s older brother Kostas was at that point drafted into the army by the Allies.

Ioannis, aged six, carried on with his mother on their long journey via Egypt to Dar es Salaam on the coast of Tanzania before continuing across land to Elisabethville, now Lubumbashi in the Democratic Republic of Congo.

“After 40 days we left Aleppo by train and in two days we arrived in Egypt, at the Suez Canal,” Ioannis’s diary says. “We stayed there for a while in tents.”

“After Egypt we took a cargo ship and crossed the Red Sea to Aden, a British colony. We stayed two days inside the ship as they were bringing food supplies for the rest of the journey.

“When we left Aden, there were hot air balloons to prevent enemies from bombing civilians. No-one knew where they were taking us. After a 10-day journey we arrived in Dar Es Salaam.”
Stamatis’s story

Stamatis and his older brother George

Stamatis Michaliades, was just six when he fled famine during the German occupation of Chios in 1942.

He left with his father and brother while others in the family stayed on the island. The boys and their father crossed to Turkey and from there to the Moses Wells refugee camp in the Egyptian desert, where they waited for the war to end.

Many Greeks were evacuated to the Moses Wells camp

While Greece’s returned refugees feel a bond with the new wave of displaced people, age makes it difficult for them to meet.

But they hear new stories from Greek TV and Marianthi Andreadi believes that despite her country’s financial problems “we’re doing what we can”.

From their balconies, the former evacuees watched Syrian refugees coming off packed fishing boats. “It’s like a mirror to the past,” says Maria Chroni. “The hardest thing is having to witness the arrival of children.”

Eleni points out that the Greek evacuees made it back home and life returned to normal. She is not sure if the same will happen to the Greece’s new refugees any time soon.